soundinitiative brings sounds of Paris to New Yorkers this week, along with some Parisian field recordings of my own in “Attempt at Exhausting a Place” premiered Saturday with works by David Bird, Alec Hall, Jessie Marino, Charlie Sdraulig, Louis D’Heudieres, Michelle Agnes Magalhaes, Pierre Jodlowski, among others. Looking forward to seeing everyone tonight, Saturday, and Sunday! Qubit Presents: soundinitiative in New York City 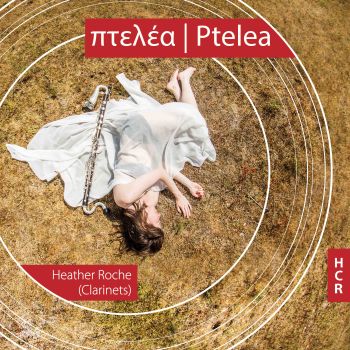 Einbond’s Resistance (2012) opens the disc with barely more than the noise of air passing through the bass clarinet’s deep tube, and even this is only gradually augmented with the sounds of keys and, eventually, tones. Yet the work is also infused with the sounds of political protest – marches recorded in New York in 2011–12. Played through a speaker in the clarinet’s bell, these slowly emerge in their own right, a weird progeny of the instrument itself.

Ptelea is available at: http://www.nmcrec.co.uk/huddersfield-contemporary-records/πτελέα-ptelea

As if to establish from the start that she’s not inclined to aesthetic navel-gazing, Aaron Einbond’s Resistance steers the snuffing, yelping articulations of a bass clarinet towards a collective voice of human protest, emanating from a speaker placed within the instrument’s bell. 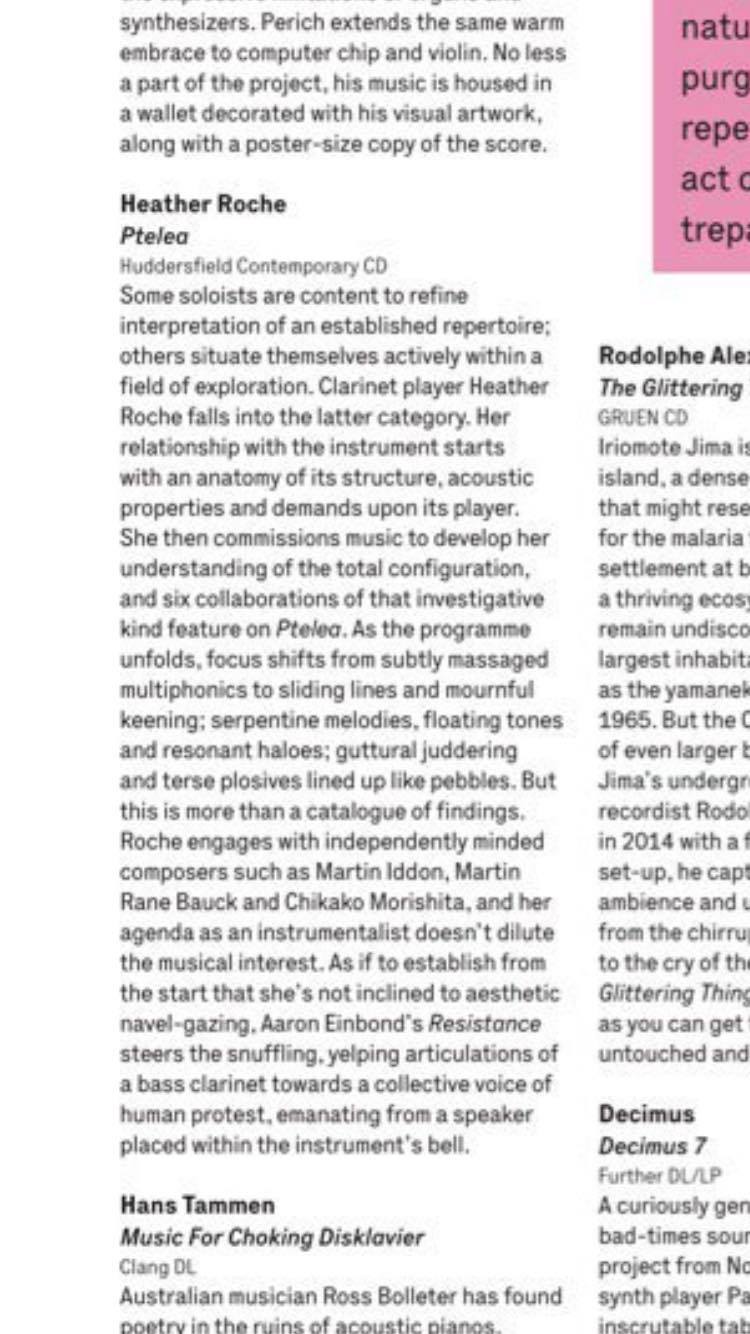 A detailed and incisive review of Without Words recorded by Ensemble Dal Niente:

For sheer innovation in compositional technique and annotation, ‘Without Words’ is remarkable…. This one feels like a very intense study of something intangible, an almost microscopic examination of the fabric of thought itself.

Three substantial compositions of Aaron Einbond, the New York composer, are available on this CD Without Words (CARRIER RECORDS 022). The first of these is the title track, featuring the very distinctive vocalising of Amanda DeBoer Bartlett performing alongside the Ensemble Dal Niente, who provide a delicate but sturdy framework of strings, woodwinds, percussion and horn. In amongst the complex atonal and dissonant creaks and glides, additional cultural references are woven into the music in the form of brief audio samples from assorted philosophical pundits, such as Marianne Moore, Wallace Stevens, Matsuo Basho, and Douglas Huebler. The complexity of this composition makes my head spin; its creation has involved a rich slew of largely non-musical sources, such as computerised research data, which have been mapped against fragmented texts and particles of speech broken down into tiny fragments, all enacted in a complex compositional schema. For sheer innovation in compositional technique and annotation, ‘Without Words’ is remarkable; just take a look at the score, which he has partially published online. This one feels like a very intense study of something intangible, an almost microscopic examination of the fabric of thought itself. Choke!

‘Post-Paleontology’ has similar close-scrutiny qualities and indeed is explicitly described as a “zoom in on an intricate soundworld’, and it showcases the mighty contrabass clarinet against just four acoustic instruments – violin, guitar, piano and percussion. As I’m fond of pointing out, the contrabass clarinet is taller than a man standing upright, and it produces profound creaking bass tones so strong that they could shake the very worms out of the ground. Einbond seems enchanted with the sonic properties of this musical chimney for sure, but he uses it incredibly sparingly, allowing its snarling growls to curl like smoke within a taut and precisely designated score. Only occasionally is the seven-foot monster permitted to utter an angry bark, a sound which is quite shocking in this context when it appears. Come to that, all the instruments here strain like jaguars and panthers kept on very tight leashes. I’m on slightly safer ground here since ‘Post-Paleontology’ feels a bit more like certain strains of improvised music which I’m familiar with, although of course it’s all composed. It’s also slightly easier to digest, since it’s not enriched with the dense conceptual layers as ‘Without Words’, and it emerges as a perfectly-programmed work which achieves similar effects to some of the tunes on Stockhausen’s Aus Den Sieben Tagen.

For those hungry for further exciting bass tones, look no further than ‘Break’, where sax player Ryan Muncy’s tightly-controlled breathing techniques are starkly presented against a backdrop of live computer processing. Barks, honks, drones, squeals – every sound he makes is dipped in amber and stands out with tremendous clarity. It’s as though the segmenting techniques of ‘Without Words’ had been redeployed in miniaturist form, to produce this solemn and profound statement.

Even more miniaturist than the above are the two sets of “Postcard” compositions, which are interleaved between the longer compositions, and last around a minute or 90 seconds apiece. Here the composer plays selections from his collection of field recordings, sometimes overlaying them with short instrumental passages from saxophones and other instruments. Even these brief passages are intricately composed; they begin life as recorded samples, which are in turn written out as musical scores, to be played live by the talented members of the Ensemble.

The release is Aaron Einbond’s debut, his first “portrait album”; and also the debut of the Chicago-based Ensemble Dal Niente. It is the fruit of many years of collaboration between both parties. Every time I receive one of these Carrier Records albums, I am usually impressed at the sheer craft and skill involved, to say nothing of the intellectual prowess of the polymath composers. This release is no exception.

Chicago’s Ensemble dal Niente proclaims its ambition with its first album, a collection of pieces by New York composer Aaron Einbond. He built most of them from delicate environmental sounds, both urban and rural, combining them thrillingly with musique concrete and radical extended techniques. On the title piece, soprano Amanda DeBoer Bartlett weaves violent wordless utterances and borrowed texts through massive reed splats and punishing string thwacks—with some sounds enhanced or obliterated by electronics. 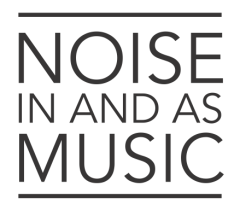 Thankfully, the book resists any impulse towards totalising and neat theorising, keeping an unruly plurality at play. Each of the contributors offers a partial perspective, addressing a particular facet of the n-dimensionality of Noise.

Thanks for the sensitive review by Vital Weekly:

AARON EINBOND & ENSEMBLE DAL NIENTE – WITHOUT WORDS CD by Carrier. A double debut so to speak. ‘Without Words’ is the first full-length cd of New York-born composer Aaron Einbond, and also the first appearance of the Ensemble Dal Niente from Chicago. Born in 1978, Einbond studied at several universities, IRCAM in Paris being one of them. He is a composer and researcher in computer music. As an electronic music producer and improviser he has performed with numerous ensembles like the San Francisco Contemporary Music Players. But let us turn now to his ambitious debut album.  The opening work, ‘Without Words’ written for soprano, 11 instruments and electronics has the complete ensemble at work. The other compositions featured on this album are written for smaller line-ups. The title track plus ‘Post-Paleontoly’ and ‘Break’ make up the main compositions. Dropped in between we find mini-compositions called ‘Postcards’. I think Einbond uses close microphones. Throughout I felt very ‘close’ to the acoustic sounds. Einbond paints in a delicate and very detailed way. It seems to me he uses digital tools to strengthen the experience of acoustical sounds and music. And he does so very convincingly. He structures his compositions from many short movements and gestures that intertwine effectively into a dramatic whole that gave full space to the timbres and other acoustical sound aspects. Pure beauty! (DM)

In Aaron Einbond’s “Beside Oneself,” for viola and live electronics, the violist Stephanie Griffin created a more alluring palette of sounds, ranging from fast, jittery gestures that permeated moments of silence at the beginning of the piece to a frantic outburst punctuated with a trill. Longer soaring lines dissolved into an electronic haze.

Classical Music Listings for May 16-22 – NYTimes.com.